Tips and tricks for visual aids with Exalted – physical

For general talk about Exalted, its setting, mechanics and playing the game
Post Reply
6 posts • Page 1 of 1

Exalted is a rules-heavy game. While technically playable with a character sheet alone, visual aids greatly improve the experience. It's difficult for your average player (let alone a new one!) keep all the systems straight during play, and then feel the pressure to stunt on top of that! To lighten the load, I've iterated into several physical tricks to ease the burden of understanding a character's resources, options, and combat state, which you are free to steal for your own table!

I've witnessed players' eyes cross as they look at their looong list of Charms and other powers printed or written on a single piece of paper, and fail to sort them into relevant ones for the scene (combat, social, investigative, etc.). So, having Charms in a single-Charm physical format, sortable and sub-settable, really helps speed the scene along. A player can hold their hand of, say, 4 social Charms, flip through them quickly, and decide to take a standard action when they want to speak up if none of them are warranted. In combat, they can set down their social Charms, and have two hands of combat Charms – offense and defense, and can more quickly decide on their combat action.

It also has the added effect of making a ceremony of learning a Charm. I bestow a new power to them/their character by printing, sleeving, and gifting them a new card when they tell me they've learned a new one.

I use a magic card as backing, but Yu-Gi-Oh, or any other CCG works well (just make sure your sleeve and card type match size-wise). You can buy boxes of old cards (like 500) for something like $15. And the sleeves can be as cheap as $5 / 100 sleeves before sales. When I'm feeling fancy I get them color-printed at the library for like 15c a page, and I can fit 8 to a page single-sided (the official comes 9 to a page). So for your starter 15 Charms and 5 characters (75), you're looking at $22, assuming you don't already have some cards tucked away, to give a hand of cards to every player, with room to expand another 25 Charms.

As for making the Charms in card-form themselves, you're covered for Solars with the released Charm card PDFs (named like Exalted_3rd_Edition_Charm_Cards_(Set_1)_(9887993), and there's 3 sets. You can find them on DriveThruRPG). For other splats, it's a little tricky, but there's a program I used called Magic Set Editor to the rescue. That's a whole other post, though.

True, a pencil and an eraser can track motes well enough. This tip is to enhance the tactile experience (and help ease committed motes altering mote totals tracking). Glass beads, ostensibly meant for fireplaces of all things, are available in bulk (search fire beads). I give my players enough beads to track both of their mote pools, and they separate them into 5 piles: committed, available personal, spent personal, available peripheral, and spent peripheral.

The end of a round of combat at mote regen time, everybody moves motes from spent to available, which makes a pleasant noise (and helps spacey players remember to do so).

Initiative:
Writing the Initative numbers for each combatant on a central, visible piece of paper is sufficient. But I have had good success cannibalizing a tracker from a board game (Guardians of Graxia), like this:

When a withering attack succeeds, I (or a player I've delegated the task to) move(s) one or two miniatures to their new Initiative. Players are able to visually match the mini on the Initiative tracker to the mini on the combat terrain. Of course, this means you need to have matched minis, and some terrain to put them upon...

Miniatures and Terrain:
I picked up some glass beads with symbols marked in them (from a warhammer expansion) that I use for most of my NPCs. PC's have been great about bringing their own figures (and painting them!). As for terrain, I'm a simple man, so I usually end up with something like this:

The little green cups I use for figures in close with one another. The Blu-ray is short, the binder medium, the table long, and waaaay away from everything is extreme.

Aura is a huge concept for Dragon-Blooded players, but can be difficult for them to track the current state thereof. Have they activated an Aura, which Aura, and have they expended it or not? Tactile trackers to the rescue! I use a set of colored cubes (one set per Dragon-Blooded player) which players can arrange to remind them of their current Aura. Below is a picture of a Dragon-Blooded in Fire Aura:

When expending the Aura, or ending the scene, simply bring all the cubes back into line.

This doesn't cover everything, and there's only enough table space anyway! So a character sheet for Attributes, Abilities, Intimacies, and so on are still required. I've gotten my second vaccine shot now, so in-person play will be back on the table!

That other post mentioned above:
Magic Set Editor for Charm Cards and sundry other powers 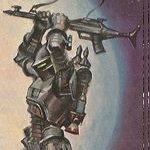 These are exactly the sorts of things I love to see. Tabletop games are uniquely situated to benefit from tactile experience. I like when resource expenditure is done by the players physically taking items and moving them around. It helps other players keep track of what's going on too.
Top

I went a bit further with the charm cards. Rather than slips of paper in card sleeves (why the hell didn't I think of that!????) I laminated: 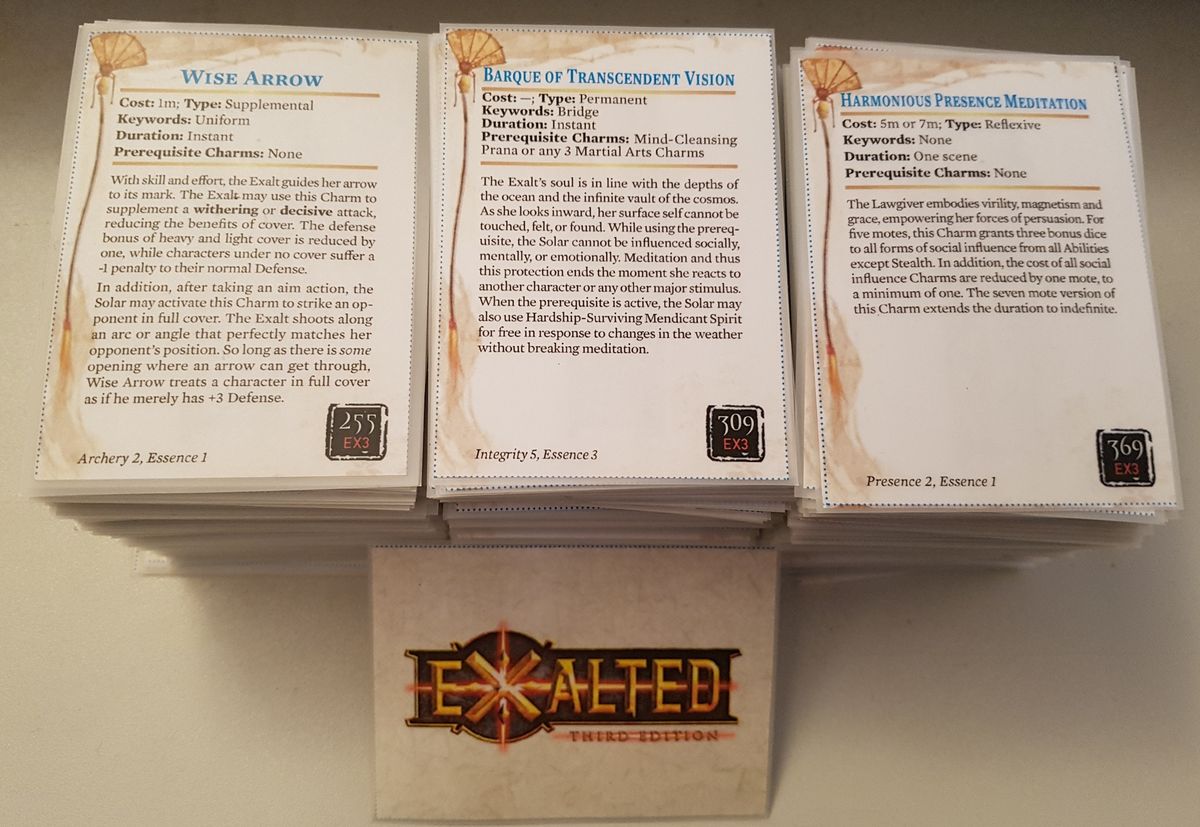 I am also more than a little irritated at myself for not thinking about sleeving the charm cards on a bunch of draft chaff. You would think that would be so obvious!

I've made a similar tracker for initiative to that one before but took the time to fancy it up with the 3e map as a watermark etc. since I think the aesthetics of how stuff are on the table can matter if you want to take that little bit of extra effort. You can make this work even better if you use tokens, coins or pogs or something to track init that have two sides. That way when a character has gone you flip their token over and you can see who's left to go. 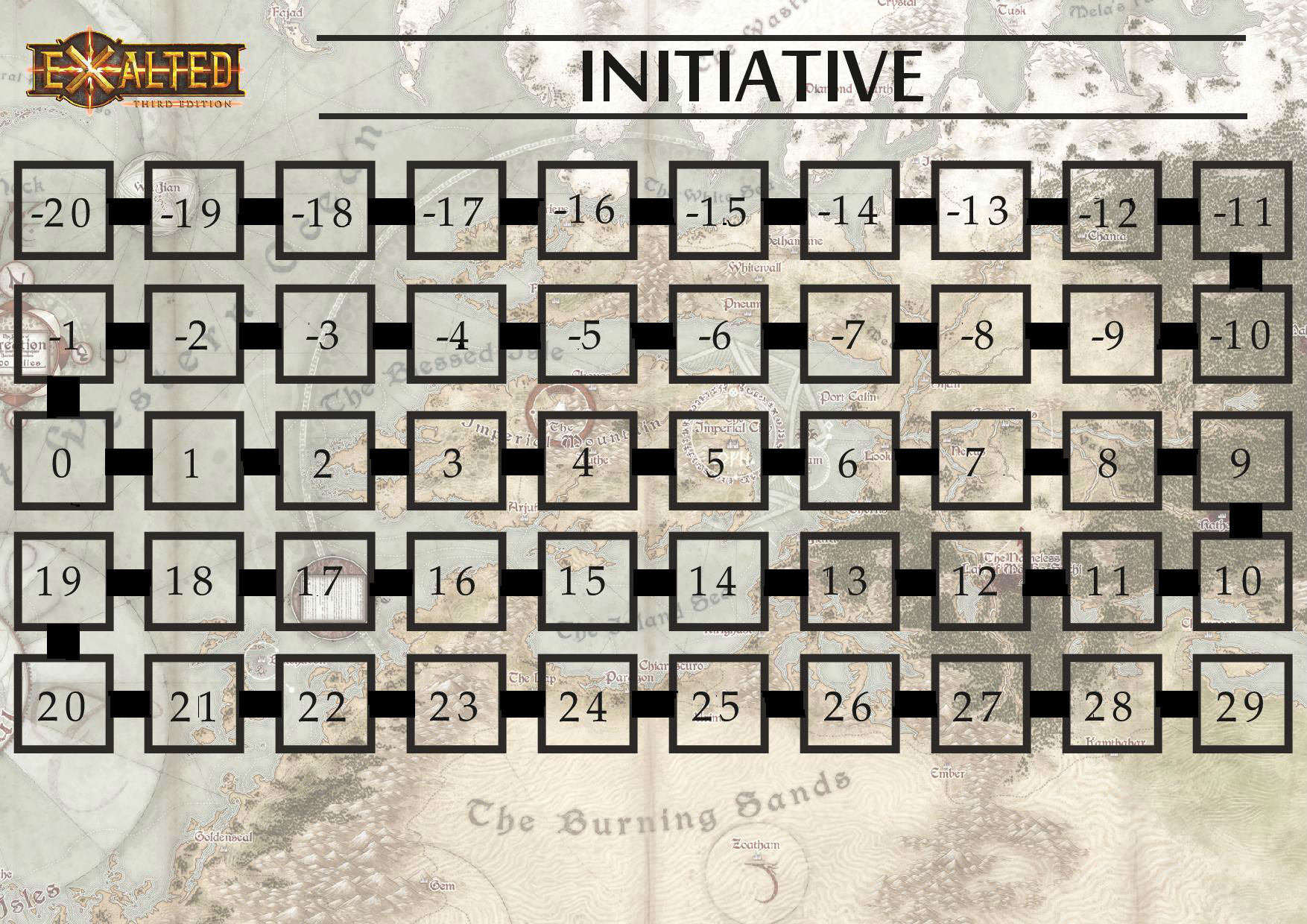 I really like the solution to aura as a visual, but know that as I player I would fidget like hell with those blocks (I have a habit of building towers of d10s if left alone too long) and probably lose track. My approach for this has been to have a little section on character sheets for anima levels and aura where you can just place a single bead or marker and shift it accordingly to the active spot
Sword of Creation Site Admin
Please consider giving input on the feedback forums about things you like or want changed
If you have any issues feel free to message me
Top 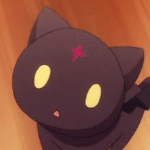 I have used poker chips for Exalted 3e as a pretty good Initaitve tracker. They stack, are easy to move around and kind of feel nice to cash-in for attacks.
https://www.amazon.com/gp/product/B012T ... =UTF8&th=1

They're also not really that expensive for what you need for a table.
-----
And stuff
DeviantArt, Twitter
House Rules and Homebrew Thread
Top

Also worth being aware of the method of generating charm cards that Tikor has kindly shared which is currently sat in the Resources forum, because I could really see myself using them next time I run IRL

viewtopic.php?f=8&t=220
Sword of Creation Site Admin
Please consider giving input on the feedback forums about things you like or want changed
If you have any issues feel free to message me
Top
Post Reply
6 posts • Page 1 of 1