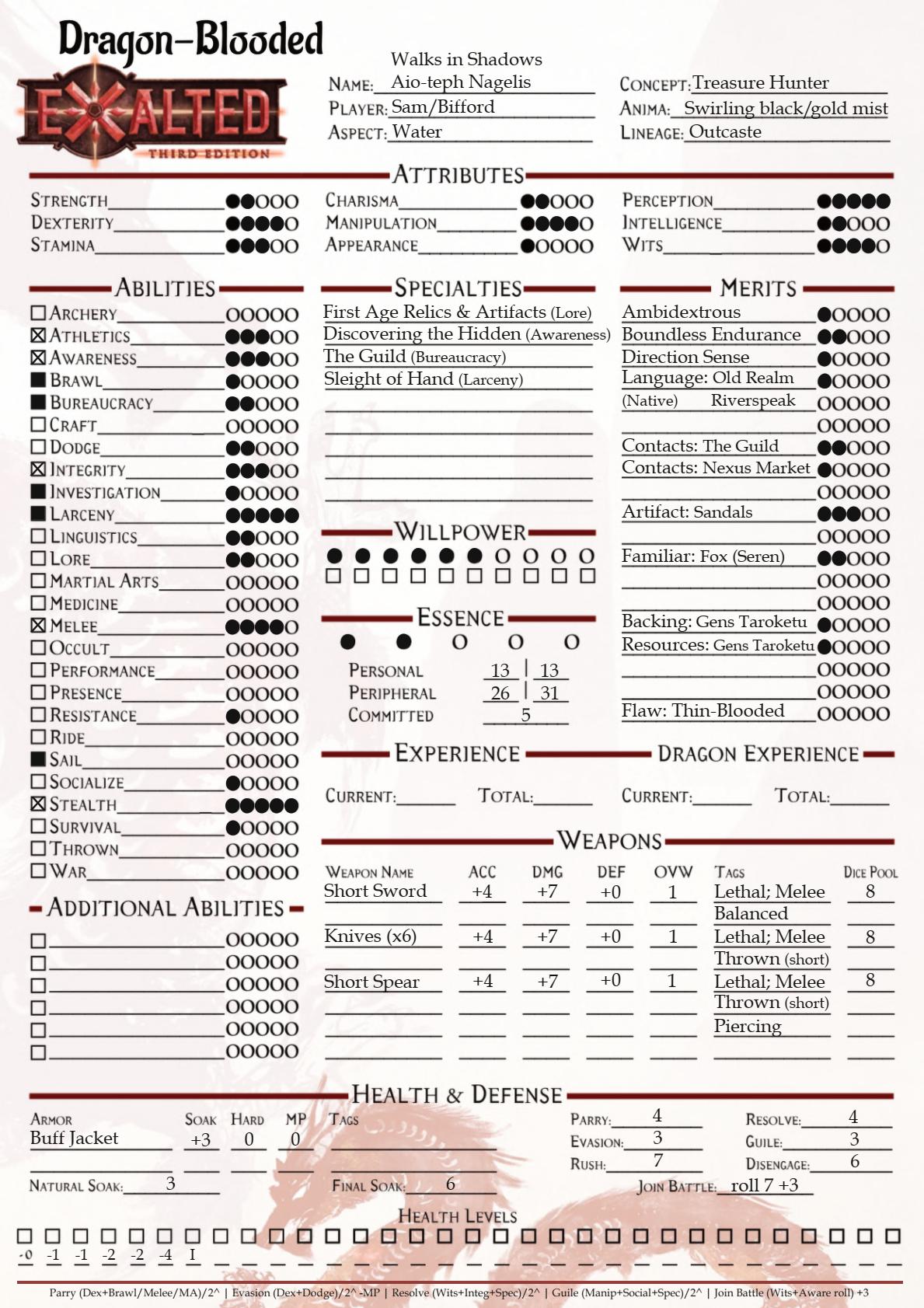 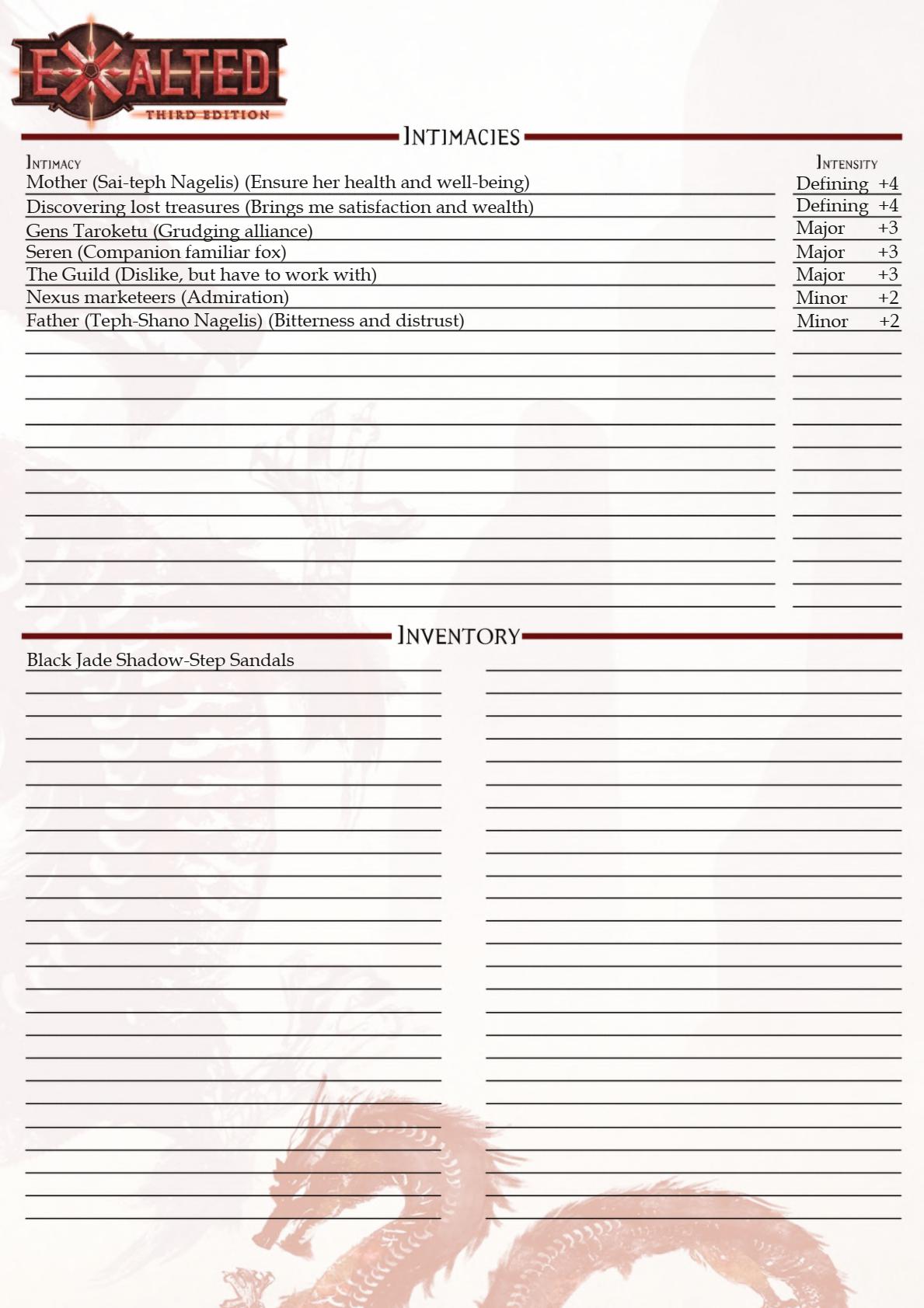 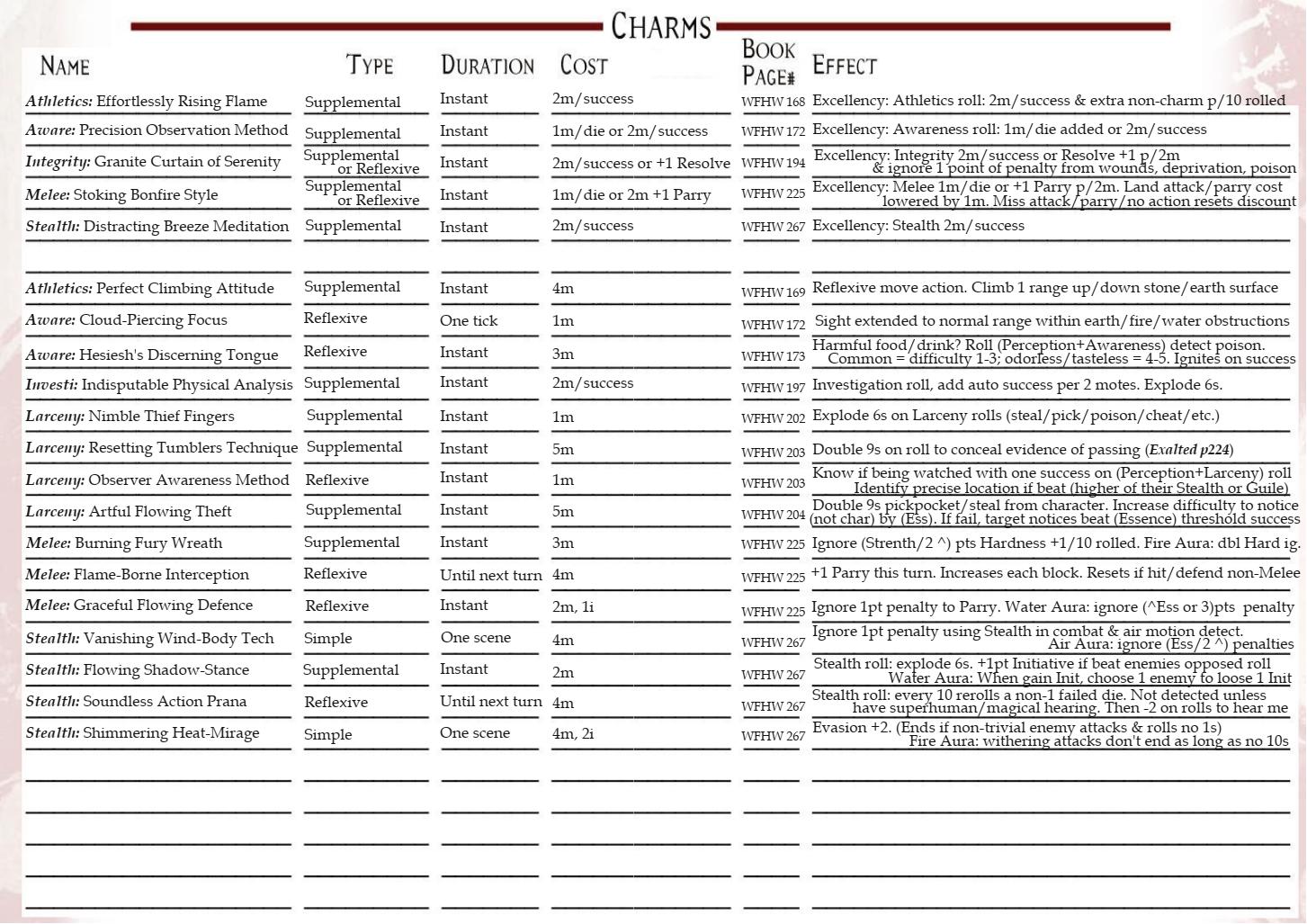 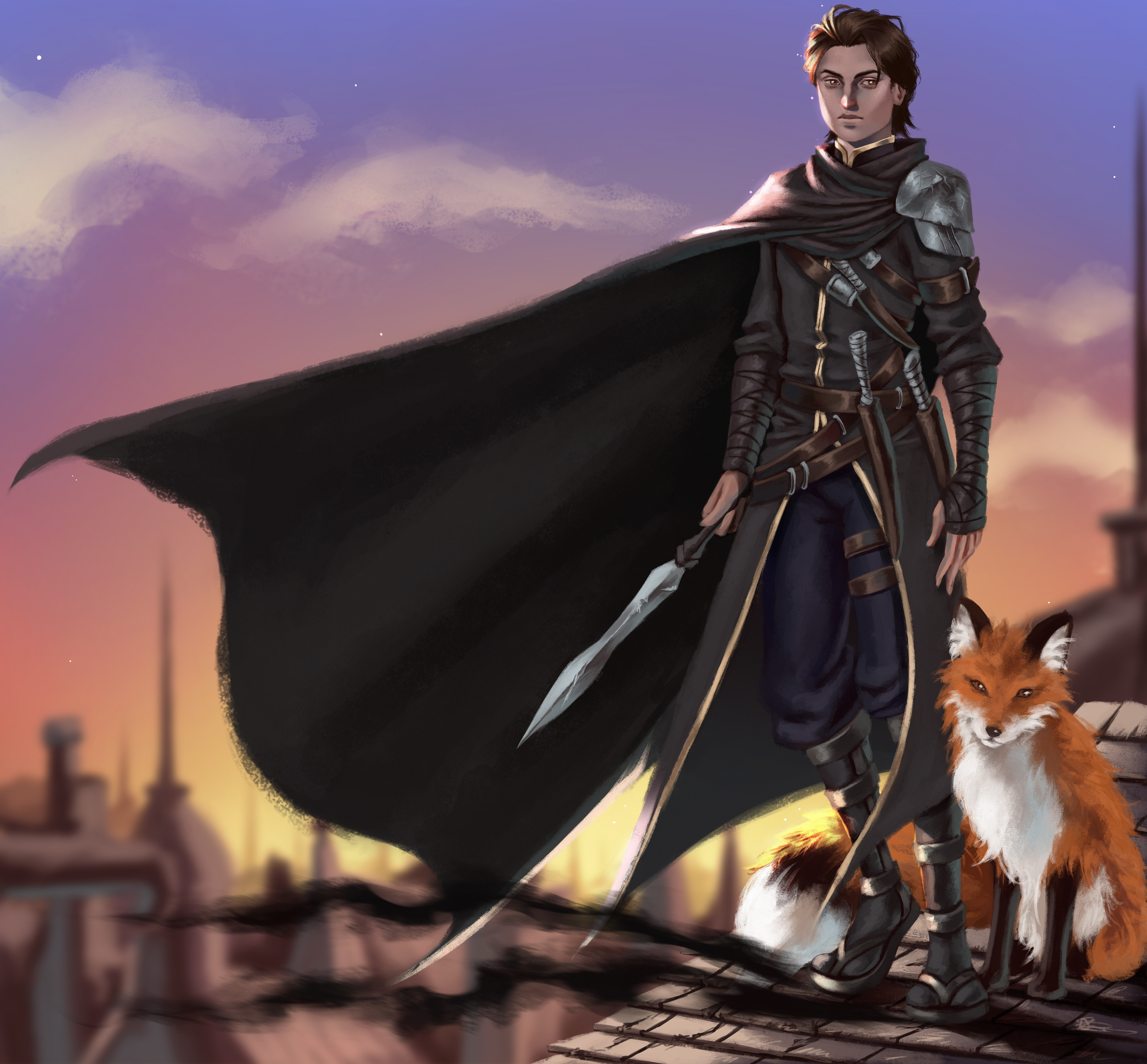 Aio-teph Nagelis, the son of a lower-level trader, struggled to uphold his normal way of life because of an ailing mother and a father who was away 10/12ths of the year on "business". Yeah, sure, the occasional Jade deposit made its way into the family's coffers, but it just as soon disappeared again. He suspects his father is gambling it away so Aio-teph learnt to siphon off some of that money in smaller denominations as soon as he sees it in the bank - if he takes too much he gets an angry message from his father, so he's learnt to be cautious.

Aio-teph also learnt that you have to make your own riches in this world, so he learnt how to persuade others to let him pay for a deal while siphoning a bit off the side; sliding a pouch off a belt, removing some contents before leaving the pouch on the ground for the owner to find a moment later; cutting deals where the numbers don't quite stack up, but only if you look really close. Never enough to be called a thief, never enough to warrant being looked into, but enough when put together to give his mother care and him some comfort.

His days in the market also taught him valuable lessons in climbing, knife fighting, and not being where a blade wielder thought you would be. Pre-empting people's moves and using that to his advantage to instead cut them became a self-taught skill, though one he did not like using, as life is precious. So when Aio-teph did have to attack he tried to incapacitate rather than kill.

Then there came the day when a dark corner of Nexus's lower level shuddered and crumbled, opening a small and hard-to-see gap into blackness. Exploring, he discovered a way into the Hollow below and beyond. Mostly he just found debris and dust, plus creatures who either ignored him or tried to eat him. Here he learnt that a short spear or sword were more useful than knives, so he started to carry these with him on such trips too. The animals who tried to eat him (he didn't kill the gentle ones) often became meals for him and his mother. Any left-over meat was sold to a trader with no questions asked and the hides usually kept them going for a month or more.

Aio-teph kept searching for artifacts as he knew there was more down in Hollow than just dark-dwelling animals. After some perseverance, he came across a small golden scarab beetle inlaid with green jade, laying under fallen masonry, with what looked like First Age script on it. It found its way into his pocket, and later to a specialist antiquarian who didn't ask questions. That pay-out kept them going for quite a while.

He found he had a knack for getting into places and recovering artifacts. On one occasion he had found a pair of fancy sandals, with some sort of shiny black material running through the leather straps. He quickly replaced his old sandals with these impressive ones. On another occasion he stood on the edge of a wide cleft, trying to work out how to cross to some distant ruins. Deep in contemplation, a shirshu managed to surprise him, charging towards him with intent. His thoughts had already been turned to the shadows of the ruins, cast by his torch, and being part of them in order to rescue more relics; but now it took on an urgency of need, not just want, and with that thought he found himself surging with power and inexplicably there. That was the moment he took his Second Breath, and his quest for long-lost artefacts intensified.

Aio-teph had a second cousin, twice removed, who was part of gens Taroketu in Lookshy. He had been to their enclosure twice before in his life; both times with his father, who seemed to know someone in authority there. Once he had started to recover artifacts from Hollow he had been introduced to specific members of the gens and would now infrequently travel to Lookshy to do business with them. He had been told that they then traded onwards with gens Nerigus and the Seventh Legion. Aio-teph usually made the journey of many days once he had found a small sackful of artifacts. Gens Nerigus didn't worry about how he acquired these items and they were happy to buy them and then sell them onwards, no doubt making a profit in the process.

Members of gens Taroketu also gradually noticed the change in Aio-teph, and he was questioned about this. Once he had told them the story of the leap he was questioned further by the head of the household who explained that he had taken his Second Breath and was now a Dragon-Blooded. Aio-teph vowed to himself that it would not change him to any great extent and that he would never be one of the stuck-up rude snobs that frequented Nexus Market.

As the next few years passed Aio-teph was given more responsibility and some little training in how to use his new abilities. He discovered that his sandals were now 'attuned' to him and would allow him to tap into their specific powers, a few of which he could already use, but others (he was told) he would have to "grow into". This was an exciting time for Aio-teph, and it kept him away from his mother for long periods of time, though he made sure that some friends in Nexus kept an eye on her health and that he sent money to her regularly (unlike his father). When he visited home they had much to talk about and skills to show her. It made her happy to know that her son could look after himself better than ever before.

Three years in to this new period of his life, the head of gens Taroketu announced that he wished to adopt Aio-teph into their family, either directly, or by marriage. This would strengthen the link between them. Aio-teph politely declined, but said that his decision may change in the future. The request is periodically brought up again, but each time is politely refused, as the time is not right, and he has not proven himself worthy as yet.

Life went on for a while, with Aio-teph and Seren growing close, and her abilities improving along with his own.

After a busy period working for gens Taroketu Aio-teph had taken a vacation, spending three pleasant weeks with his mother back in Nexus. Now the time had come to head back to Lookshy and find out if there was anything required of him. He said his farewells and set off.

The atmosphere on arrival was noticeably different to normal. On questioning his mentor he was told that a small number of Dragon-Blooded, his cousin included, had gone out a few weeks ago, on a Wyld hunt, as word had reached them of at least one anathema out in the wilds. One of the hunters had the ability for long-range communication, but that frequent communication had ceased, and they had been unable to regain the link. The Lookshyian gentry were asking for new Dragons to join together for a second Wyld Hunt.

Aio-teph thought himself ready to properly field-test his abilities and so he asked for, and was granted, permission to join the hunt.
Last edited by Bifford on Mon Jul 11, 2022 9:59 pm, edited 5 times in total.
Tags:
Character
Dragon-Blooded
Outcaste
Water
Top

Attunement: 5m
Type: Light (+1 Die to Dodge and Stealth checks)
Tags: Worn
Hearthstone Slot(s): 0
Era: First Age
Description: The history of these sandals is lost to the First Age. Made of supple but hard-wearing leather, shot through with black jade. The jade can at times appear like shadows, gleaming at times with glints of something beyond, and these seem to flow and weave about the straps that wrap up the legs of the Exalted to their calves.

When first attuned a one-off shadow-step occurs, hinting at the sandal's potential.

Once attuned, the wearer has a greater ability to hide within any shadowed area and gains a better ability to dodge attacks, like smoke in the wind.

The wearer may probe the wilderness for unfamiliar places of interest and be guided in their direction.
If seeking a location that can be named (eg. a town/natural feature) they provide a rough direction sense.
If seeking novelty they point the wearer towards an undiscovered or forgotten place of significance such as a demense or historical ruin.

Move within one range band, from one place of cover to an equal place of cover. This transition is instantaneous, the Exalt blinking out of one location and appearing in the other. This other location must be within natural sight.

Shadow-Crossing Leap can only be used once per scene, unless 1wp is spent to energize the sandals.

The wearer becomes like dark shadows, striking a foe and then evading. After successfully making an attack, the user may reflexively attempt to Disengage, moving back one range band from the target.

Resonant: The wearer’s shadowy nature on the retreat becomes more pronounced. They ignore difficult terrain on this disengage attempt.

This for the clothing and style: 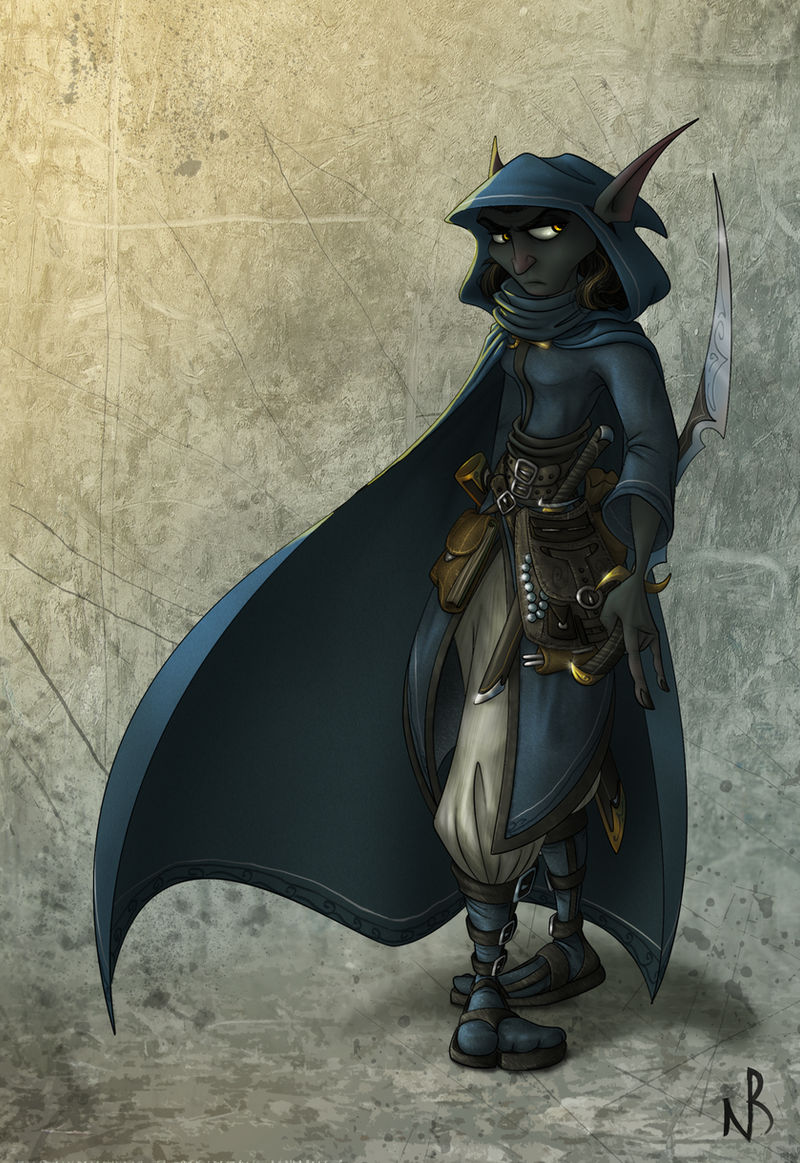 
The history of these sandals is lost to the First Age. Made of supple but hard-wearing leather, shot through with black jade. The jade can at times appear like shadows, gleaming at times with glints of something beyond, and these seem to flow and weave about the straps that wrap up the legs of the Exalted to their calves.


Face / look wise I am thinking a bit like Tom Holland in Uncharted: 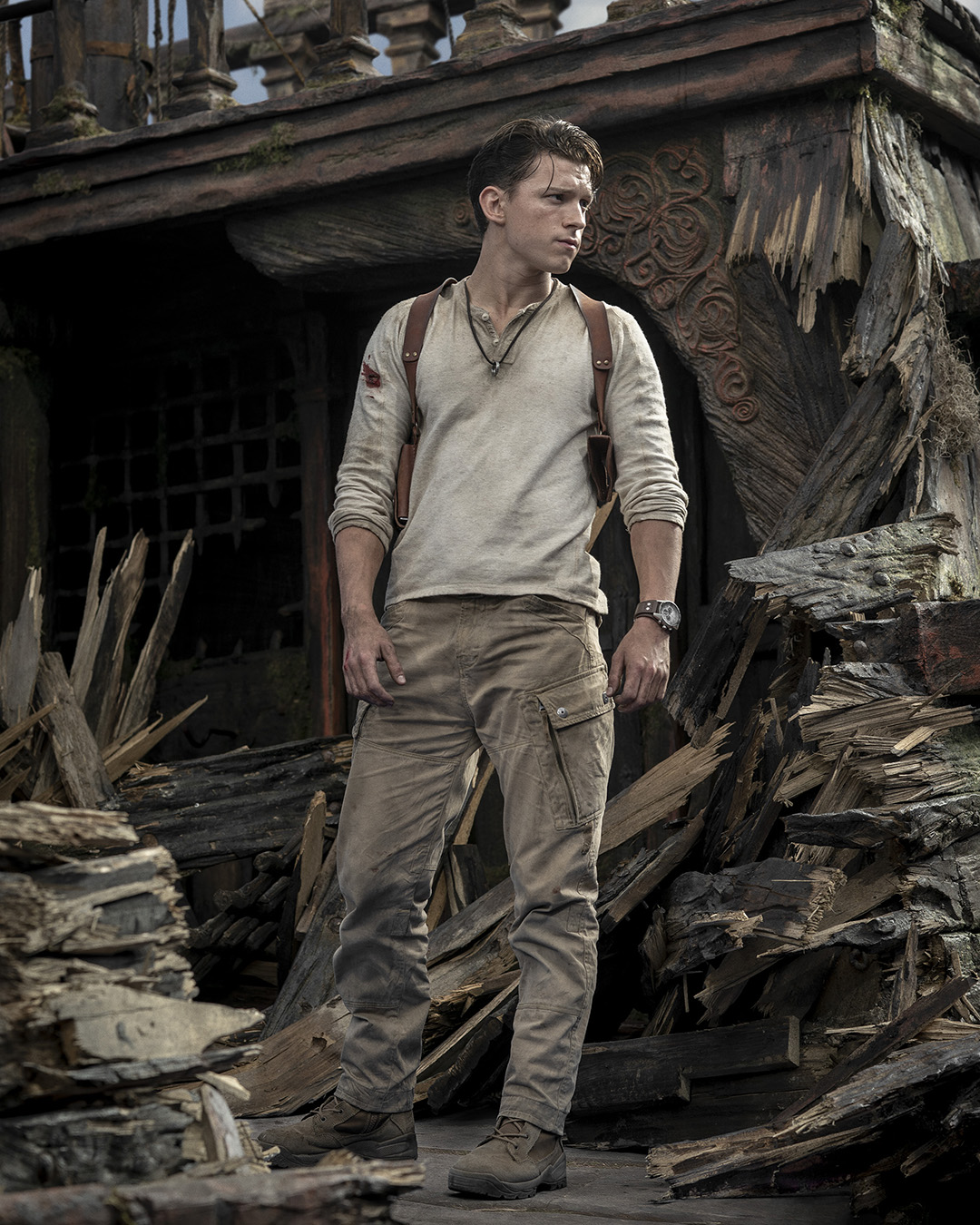 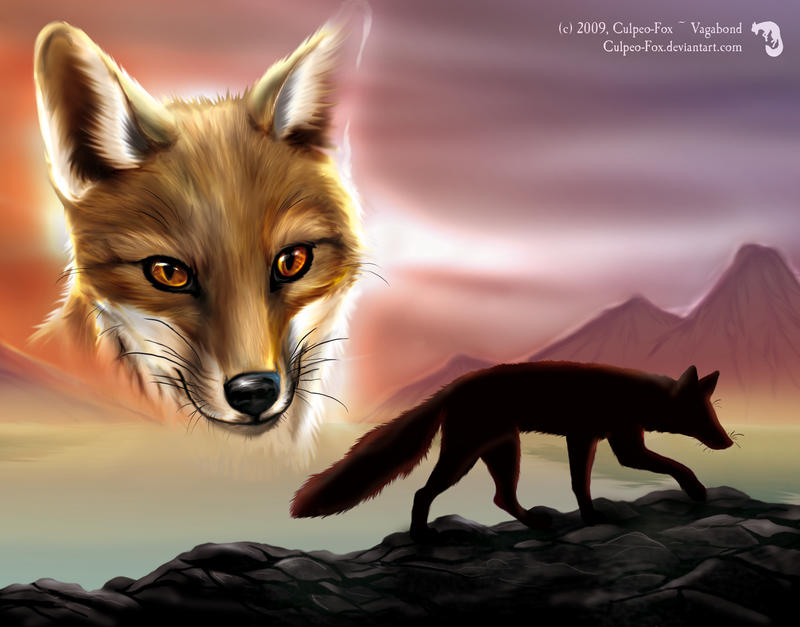 ...but maybe a bit more alternative and dark as time passes and she grows: 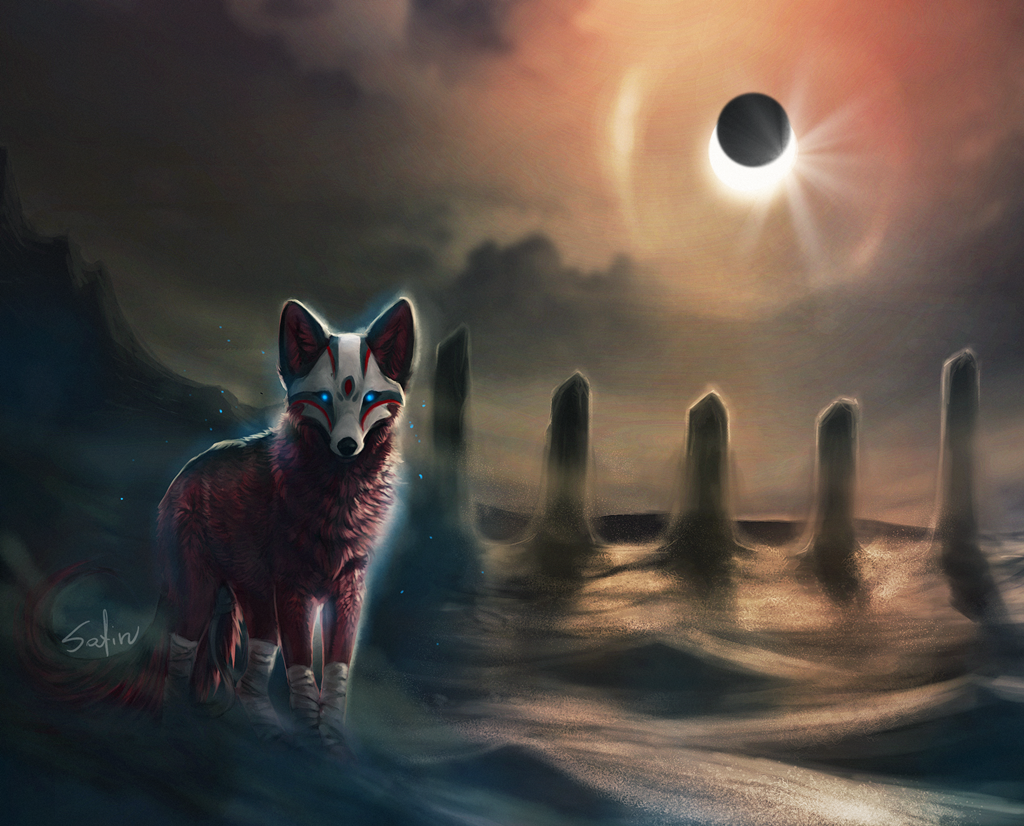 The final artwork for Aio-teph and Seren: