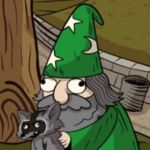 While Lion Dogs serve as the shields of the gods, guarding them or that which they treasure, the wrathful divinities known as Vajra Soldiers (sometimes called Celestial Kshatriyas, Levinbolt Reavers, or simply Sky Warriors) serve as the spears of the gods, sallying forth to intimidate or destroy their enemies. Manifesting as towering warriors with the heads of storks, vultures, canines, boars, or simply fierce shaggy men, Vajra Soldiers live for martial combat in all of its forms, often dedicating decades of their free time studying or teaching various aspects of warfare. They appear suddenly, standing atop steeds of vapor and bronze, meting out divine calamity upon their surroundings and vanishing just as swiftly as they appeared. Other times they hound individual warriors, delivering beatings intended either to humble their victim or to forge them into a more skilled combatant. Most of them have centuries of experience, and are usually garbed in ancient, or even pre-human panoplies. It is not uncommon for them to eschew normal weaponry, preferring eccentric armaments from exotic or dead martial traditions, or simply arms of their own devising.

Regardless of their personal armories, every Vajra Soldier has the ability to summon both javelins of red lightning and a personal flying steed resembling a broad bronze shield floating atop a discus of cloud vapor. Their crimson thunderbolts, thrown with great skill and force, produce shockwaves of concussive sound upon impact, each resembling the peal of a gigantic gong. Their steeds, on the other hand, ferry them across the skies with great swiftness and dedication, acting as shields should their masters descend to the ground to fight in close quarters. Each Vajra Soldier shares a deep bond with their steed, and vice versa, and the death of one may drive the other mad with grief.

Once, great legions of Vajra Soldiers waited in reserve, ready for Yu-Shan’s orders in the event of war. Countless Vajra Soldiers serve the Maiden of Battles, while the Unconquered Sun keeps a company of the warrior spirits that has long since been deemed ceremonial. In the Age of Sorrows however, the old order has decayed, and several of the godly warriors have deserted or died in battle. Many can be found in terrestrial spirit courts, serving as soldiers dedicated to the local pantheon, or simply as deific mercenaries. Others wander the face of Creation searching for battles to fight or students to train.

Many Vajra Soldiers share a vice: While normally disciplined even when off duty, after particularly strenuous battles, the godly warriors descend into fits of joyful, life-affirming hedonism. After a war, a Vajra Soldier will often consume vast quantities of food and alcohol while blowing their heavenly bonus on courtesans and fine silks. Once they emerge from these benders, they are loath to admit the lapse in discipline and presenting them solid evidence of such can be used as leverage over them.

Mastiff-faced Zeng Zalar has been in the employ of the Bureau of Battles for centuries, dutifully following orders from on high. His assignment for the last hundred years has been to watch over the 7th Realm Legion, a task which he has performed with stoic distinction up until recently. Following the legion’s acquisition by House Cynis, the disrespect shown to the force’s traditions and outcaste officers has driven him to uncharacteristic apoplexy. He has issued formal protest to both the Immaculate Order and his heavenly superiors, but his complaints have fallen on deaf ears in both cases.

Their beard braided with the skulls of slain demons and raksha, Galabard Gan deserted their post in the Spirit Court of Twenty-Five Peonies long ago. A transient drunkard, they wander as a divine mercenary, selling their services not to the highest bidder, but to the most interesting one. The Bull of the North hired them to fight the Tepet Legions, and while they reduced many legionnaires to ash with their lighting chakrams, they turned coat the moment that Tepet’s defeat became inevitable, guarding their retreat from Icewalker harriers. When questioned by Tepet Yamabushi as to why they defected, they replied that they had “a soft spot for underdogs.”

Ying Lau, bearing the title of “Towering White Phoenix Marshall,” is ancient even by divine standards, having served the Maiden of Battles since beyond memory. The stork-headed god’s attire is always immaculate, expensive yet tastefully understated, his feathers bearing not a spot of blood or dirt even in the thick of battle. Always at his side is his personal starmetal glaive Father of Routs, given to him by Mars herself, which he often leans on like an old man with a walking stick. He is renowned as a figure of upstanding character and immense prowess throughout Yu-Shan, an exemplar of loyalty and wisdom. He is also deeply, utterly corrupt, loyal only to his own ambition and distant, inscrutable Mars. In back rooms, he arranges the downfall of career rivals through catspaws and cutouts. When his foes in the bureaucracy meet their downfall from his schemes, Ying Lau uses his respected public persona to earn more social prestige by extending magnanimous generosity to the unfortunate rival. Such charity merely masks the threads of debt and obligation he winds about his victim’s necks.

Supernatural martial prowess, deep understanding of warfare and combat, teaching or bestowing martial skill, summoning javelins of concussive red lightning, summoning a steed of clouds and bronze(acts as both a mount and a shield), tracking the targets of divine wrath, laying minor blessings and curses upon individual soldiers or small regiments, creating small localized storms.

How do these gods get along with say the Aurach warrior gods of Ahlat?
I play the video games.  https://www.youtube.com/bogmod
Top

Heaven having a military outside of some of the groups already mentioned in canon is bizarrely something I've not actually thought about before but this is a pretty great execution that I can see myself stealing. Who do you see them having fought historically since given your take on canon the gods didn't have an active role in fighting the primordials and have potentially had it a little cushy since then
Sword of Creation Site Admin
Please consider giving input on the feedback forums about things you like or want changed
If you have any issues feel free to message me
Top

andrix wrote: ↑Sat Jun 12, 2021 9:52 am Heaven having a military outside of some of the groups already mentioned in canon is bizarrely something I've not actually thought about before but this is a pretty great execution that I can see myself stealing. Who do you see them having fought historically since given your take on canon the gods didn't have an active role in fighting the primordials and have potentially had it a little cushy since then

Largely Fae, Ghosts, and Forbidden Gods. Also harassing mortals for various reasons. A lot of what they do is chucking lightning-bolts at buildings as a form of divine retribution.
Top
Post Reply
5 posts • Page 1 of 1